The proudest moment in Sir Harpal Kumar’s career to date came in 2014, when it was announced that for the first time in history, as many people in the UK were surviving cancer – for at least 10 years – as were dying from it. 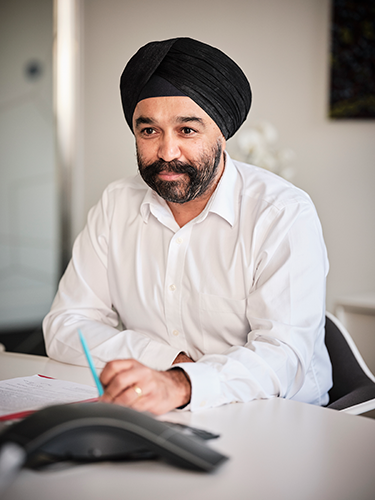 Sir Harpal was ten years into his 14-year tenure at Cancer Research UK, and seven years as its chief executive. Of course CRUK couldn’t claim all the credit for reaching this tipping point, but there’s no doubt that the UK’s biggest charity played a key role, and no doubt that Kumar’s drive and determination was pivotal in shaping the organisation into a force that could imagine and then support such progress.

The son of Sikh refugees who fled Pakistan to India and then made their way to London, Kumar spent his childhood helping his father build up his grocery store business and studying hard. The values of hard work, education, ambition and risk-taking were instilled in him from a young age, and his natural intellect saw him do well at Latymer Upper School and then Cambridge University, where he used a scholarship from the UK Atomic Energy Authority to study chemical engineering – although it had been a very close call between engineering and medicine. He stayed on at Cambridge to do his Masters and it was then that he was approached by McKinsey & Co to join their team of management consultants. This was to be a fortuitous decision, for McKinsey sponsored him to go to Harvard Business School in the US, where he worked with a biotech company and did some courses at Harvard Medical School. This work revived his interest in medicine and he realised that his future lay in healthcare. So when he returned to London with McKinsey, he specified that he wanted to work with healthcare clients only.

One of these clients was the Papworth Trust. A disability charity that ran rehabilitation programmes for people with spinal or head injuries or learning disabilities, and was a social landlord, Papworth was in some financial trouble and asked McKinsey to help it design a turnaround plan. Kumar led the pro bono project and presented his recommendations to the Trust’s chair, only to be called a week later and offered the job of chief executive to implement these. At the age of 27, Kumar found himself in his first voluntary sector role, heading up a multi-million-pound, 76-year-old charity with more than 500 staff.

Within 18 months, he says, the losses had been stabilised and the charity began to rebuild. By the time he left three years later, the Papworth Trust had substantially increased both its voluntary income and its service delivery contracts with local authorities and the NHS, and expanded its social housing stock still further.

But he was tempted back to the private sector by a friend who worked in venture capital and had an idea for a new company. Kumar became the first employee of Nexan Group PLC, which developed and launched diagnostic devices for conditions such as sleep apnoea in patients with heart failure. The business burgeoned in both the UK and US but after a few years the US market outstripped the UK and Nexan was sold to the US team. The boyfriend of Nexan’s marketing director worked for Cancer Research UK, which had just been formed by the merger of the Imperial Cancer Research Fund and Cancer Research Campaign. The new charity was looking for someone to oversee the merger of the two incumbents’ commercial subsidiaries. Harpal Kumar had his next job – back in the charity sector.

Less than two years into his role as chief executive of Cancer Research Technology Ltd, Kumar also became the charity’s chief operating officer. Three years after that he stepped up to be chief executive.

Over the ensuing decade, Kumar instigated enormous changes at CRUK. “The organisation changed hugely,” he says, “and the whole field of cancer research changed phenomenally over that time.”

The most important development, which laid the foundations for all the other changes, was in how the charity saw itself and what its purpose was. “When I got there,” says Kumar, “it was very much an academic, science-driven organisation and it measured its success by the quality of the science it was doing and the publication of that science in the top journals. It was without doubt one of the best scientific organisations in the world.

“That per se didn’t change by the time I left, but what did change is how we thought about the organisation, and that was, we had to do something about cancer. Of course we do that through science, but the metrics are not about publications, they’re about stopping people dying from cancer.”

He admits that required a big cultural shift. “We did it in a way that didn’t disenfranchise the scientists, it celebrated them, but nevertheless it was a big cultural change and it had a very galvanising effect on all the parts of the organisation that weren’t science, not least fundraising. Being able to really articulate a very ambitious set of aspirations and being publicly ambitious about what we were trying to achieve, was a big shift.”

This laid the groundwork for transformation in many more areas, Kumar says. Under his leadership, income trebled as the fundraising team capitalised on the dynamic new CRUK brand and character, and the charity got better at doing commercial deals such as the licensing of new drugs to pharmaceutical companies. This growth enabled CRUK to fund some big, bold new initiatives, among them the Francis Crick Institute (where Kumar was a trustee) and the creation of cancer research centres across the country, described by Kumar as “big constellations bringing universities and the NHS together with us to really shift how we thought about cancer treatment and diagnoses”. There was also an international programme called Grand Challenges, which brought together the brightest research minds from across the world to tackle the toughest problems. Meanwhile, Kumar was also a trustee of the Institute of Cancer Research and chair of the National Cancer Research Institute.

All of this also had a major impact on CRUK’s ability to influence government policy, culminating in 2015 in Kumar being commissioned by Prime Minister David Cameron to devise the next national cancer strategy. “The government had had cancer strategies before but it had always been done by the NHS or the Department of Health,” he says. “They’d never gone outside government to ask someone to do something like that before. But with everything we’d done on things like smoking, bowel screening, getting early diagnosis on the map, and the growth we’d had – all those things became very self-reinforcing and ultimately I was asked to lead the cancer strategy for the NHS.” This strategy, for the five years to 2020, has just been superseded by the new NHS Long Term Plan, but on cancer the core of Kumar’s strategy remains alive within that, he says.

He rejects any suggestion that the government has made the environment hostile for charities to engage with it. “If you’re good enough at what you’re doing, the government will want to work with you. But CRUK were very responsible in the way we went about our relations with government. We had two rules: one, if we wanted to be critical of government, which we often were, we didn’t do so in the public domain. I had some pretty robust conversations with ministers but I did those directly rather than in public, and I think they really respected that. Secondly, we didn’t concentrate on a myriad of issues, we concentrated on one or two at a time and really focused in on those. We found that often ministers wanted to do these things but they struggled with the ‘how’. We were able to help them.” In 2016, Kumar received a knighthood for services to cancer research.

And cancer itself? Has CRUK’s work prevented more people falling victim to cancer, or helped them to live longer if they get it? Most definitely, says Sir Harpal. “On the prevention agenda, smoking rates have come down to about 15 per cent of the population, compared with 50 or 60 per cent a few decades ago, and really significantly since the 1990s. Survival rates have increased significantly, though more in some cancers than others – in breast cancer we’re now up to 80 per cent survival, in some kids’ cancers it’s 80 or 90 per cent, but in pancreatic cancer it’s still below 10 per cent. So it’s a very differential picture, but overall the rate of progress has accelerated and is still accelerating.

“The biggest challenge in future is still smoking, despite the progress we’ve made – more people are still diagnosed and die of smoking-related cancers than any other, by some distance. That said, smoking rates are coming down and obesity is growing, so at some point those lines will cross and obesity will be the biggest cause. Many different cancers are driven by obesity and our big worry is that childhood obesity rates are so high, because if you’re overweight as a child you’re much more likely to remain overweight as an adult. So that’s a huge issue.”

But it’s no longer the issue at the top of Kumar’s in-tray, because in 2018 he departed CRUK and joined Johnson & Johnson, the world’s biggest healthcare company with 135,000 employees and sales of £81bn, as head of innovation for Europe, the Middle East and Africa.

Does he has any words of advice for charities, having been up close and personal with both sectors?

“It’s ironic, because people who work in the charity sector are generally the most highly motivated and engaged with their work, but I think a lot of charities are not ambitious enough. Ultimately it comes down to leadership. The leaders drive the ambition of an organisation. I said at my CRUK leaving do, ‘If I’ve done one thing while I’ve been here, I hope I’ve lifted the aspirations of this organisation’. I don’t think that exists enough. The charity sector does amazingly important and arguably the most difficult work, but it could be more ambitious – more self-belief, more focus on impact, more deep thinking about how to do things differently, about where to go next.”

He’d also like to see stronger regulation and tighter controls to improve governance and efficiency. “One of the things I think is brilliant about the UK is that whenever anybody feels passionately about something, they can start a charity – I think that’s brilliant and an important part of our democracy.

“However, I also feel there are too many charities and that some of them are not very well run or efficient. I don’t think that the sector does a sufficiently good job of regulating itself or being regulated. I don’t think the regulator is strong enough; I don’t think it drives the charity sector to be better in the way that it could. I don’t think there are enough charity mergers, and I don’t think enough charities stop when they should. So my point is, it’s a brilliant sector and I love the way it comes about but there needs to be something on the other end of it that stops it continually proliferating not necessarily always in a way that maximises the impact or the return on what people put into it in terms of time and money.

“And the regulator needs to be stronger and could exert more influence in trying to bring charities together and strongly encourage better governance and improved efficiency. I don’t think they need stronger legal powers, I just think they’re grossly under-resourced.”