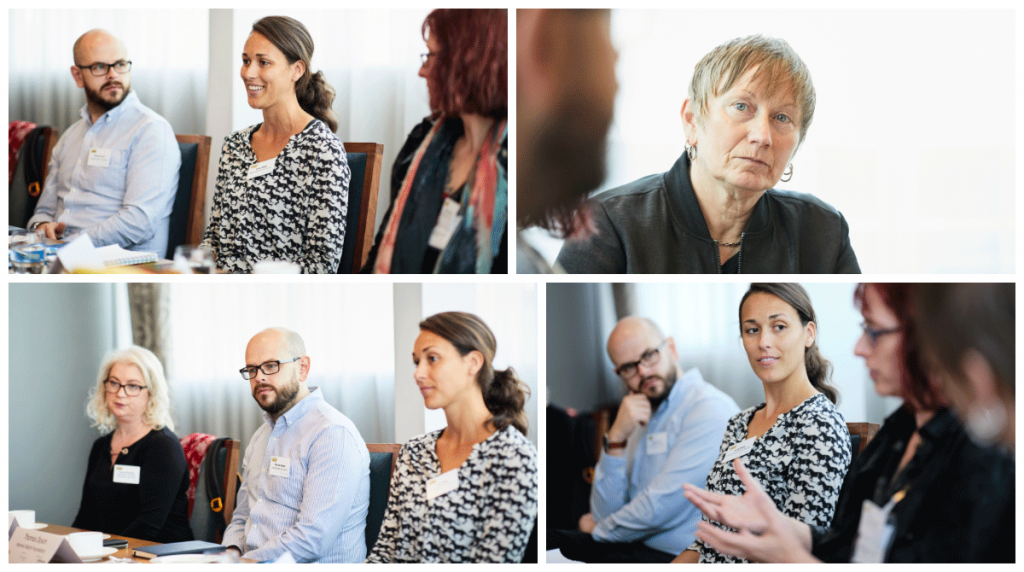 The winners of this year’s Charity Awards are engaged in a wide range of projects and services. However, there are many similarities in the challenges faced by these organisations and things they can learn from each other’s successes. To this end, we gathered several of the winning entrants together to share ideas and experiences, and discuss some common themes affecting their work.

The key purpose of many charities is to challenge the accepted way of doing things and seek real change for a better outcome for society. This means changing the way people think, which can be particularly tricky when dealing with issues that are sensitive or traumatic. At the Internet Watch Foundation (IWF), which works to remove explicit content depicting child abuse from the internet, a lot of work is dedicated to changing people’s approach to what they see online. “The immediate reaction of anyone who stumbles across abusive images online is to close the window and shut the computer down,” says Thomas Dyson, marketing and events manager at IWF. “But that actually is perpetuating the abuse. We try to change that mindset by reaching out to the groups that may come across such content so that they will report it.”

Many charities need to be able to engage with the communities that affect their work to change mindsets or harmful practices. For International Animal Rescue’s efforts to protect the rainforest environment for the thousands of endemic species that live there, including orangutans, the organisation needed to convince local farmers that traditional methods were unsustainable.

By engaging with the community over a period of years, International Animal Rescue managed to work with locals to find alternative ways of farming and generating income. “Many women in Indonesia leave school early to have children and employment opportunities are low,” says Lucy Read, senior fundraising officer at International Animal Rescue. “We knew that if we got them involved, we could create a sustainable community programme.”

A big part of engagement is to build relationships. Many of the charities that won in this year’s awards demonstrated a genuine commitment to lasting connections with the communities in which they work.

Rachel Cockett, director of development at Birmingham Museums Trust, says that the key to this is patience. “We needed to build relationships with many different communities to create a more representative collection,” she says. Reaching out to the Caribbean, Muslim and LGBT+ communities, as well as those under 25, the Trust initially aimed to collect 40 new items for the exhibition. By the end of the threeyear programme, it had acquired more than 1,800 new objects.

“We could do this by really engaging the leaders in the community,” says Cockett. “We gave it the time it needed, sometimes timetabling twice as long to do something.”

For intervention to work, there has to be trust, says Rose Mahon, head of excellence and development at The Nelson Trust. Her organisation works with women across Gloucestershire, Wiltshire and Somerset involved in sex working, facing homelessness or dealing with substance addiction.

“First we have to build trust with the women we are trying to help,” she says. By listening to their needs and adapting its services to provide better care – such as operating out of hours and providing a mobile drop-in service – the Trust earned the women’s confidence.

“We also had to work closely with the police and the local community and then act as a bridge between them and the women. On top of this there are the needs of funders and around 18 other agencies involved in providing services. To grow the project, we had to build up levels of trust over time in multiple relationships. Without trust it couldn’t have worked.”

But running an outstanding charity or project is not just about the services you provide and the communities in which you work. It is also about the culture of the organisation, and a big part of that is how you treat your staff.

“Every report of abuse that comes to us is viewed by human eyes,” says Dyson from IWF. “AI and other technology is simply not advanced enough to gather all the contextual information that we need to remove content or inform the police so that they can potentially rescue a child. But viewing this material takes its toll on the mental health of our analysts.”

So, now it has infrastructure in place that provides regular support at all points for its staff, from a rigorous recruitment and training process to monthly counselling and psychoanalysis.

Staff wellbeing is a major concern for The Nelson Trust also. “A lot of our staff have lived experience themselves and hearing about traumatic events can trigger bad memories,” says Mahon. “We have to be constantly mindful of their mental health and whether they are coping with the work.”

Harriet Stranks, director of grants at Lloyds Bank Foundation for England and Wales, says that she is seeing an increasing proportion of charities mentioning that wellbeing of staff is more of a concern. “The ever increasing complexity and intensity of their daily working lives means that of a lot of frontline workers are really suffering,” she says. “With cutbacks and austerity, it has become harder to get funding for capacity-building programmes and training.”

Funding core costs such as these, coupled with laborious admin, are just some of the challenges facing charities when applying for grants.

“Charities end up jumping through hoops because the funder is asking them to do so,” says Stranks. “No funder wants charities to waste their resources on useless admin, so they should ask for the same numbers that charities give to their trustees. They shouldn’t be creating different figures just to please funders.”

Cockett at Birmingham Museums Trust shares Stranks’s frustration. “We have to create different sets of figures, with different budgets for different funders. This time could be much better spent doing other things.”

According to Stranks, the other problem is that the system is not necessarily benefiting the most deserving. “What ends up happening is that funders tend to give grants to those organisations that are very good at applying for them, without really considering if they are the charities that are delivering the best services to benefit the most marginalised people.”

Looking to the future, Dyson is bullish on the power of digital. “Charities need to get much better at marketing themselves, and social media has a big role to play in that. I’ll push most of my budget into digital marketing if I can, because I can measure it, I know it’s effective and I know that it provides ROI. But you have to do it properly. Otherwise it will fail.”

For Read at International Animal Rescue, social media is providing a significant income boom. “Social media is massive for us. Facebook’s donate button and its birthdays fundraising function provide vital income, while our supporters who visit Borneo share it on social through Instagram and Snapchat.”

For Dyson, one of the keys to the success of a digital strategy is to make sure you invest in the people who are involved in it. He says: “Whether that is by training up your own staff or bringing in consultants, you have to make sure you have a budget allocated to these channels or it will be a disaster.”

Cockett, however, cautions against innovation for innovation’s sake, especially when applying for funding. “For some project-based funding, people are looking for something new all the time. But if you have something that works and is well-evidenced, then that pressure to be continually innovating isn’t necessarily a good thing. The key point is to do what you do well.”