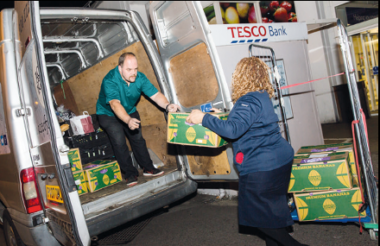 Research by Tesco showed that the retailer was throwing away around 1 per cent of its food each year.

While this is minimal compared with the huge volumes of food passed to food waste charity FareShare by producers that supply the supermarkets, it’s still a lot of wasted food – and an excuse for the media to attack Tesco.

FareShare’s core business is to take in huge volumes of surplus food donated by the food industry and redistribute it, from its 20 warehouses, to its member charities who pay an annual fee. FareShare already had a relationship with Tesco, redistributing the ‘invisible’ surpluses that arise from Tesco’s supply chain – enough for five million meals per year, in fact. But Tesco was still facing criticism for wasting food at store level and FareShare wanted to help Tesco tackle this problem.

Fareshare CEO Lindsay Boswell says: “From a mission perspective it made sense for us to find a way to connect charities with supermarkets so they could get more food, and from a strategic perspective we knew that if we could help Tesco with its problem, it would send more of its suppliers to us when they have surpluses.”

Boswell said the charity recognised that its traditional model of redistributing food via warehouses wouldn’t work, because the food available from stores comprised comparatively small quantities of very short-dated products. “We realised we needed to cut out the old-fashioned FareShare system altogether and connect a local charity with a local Tesco store, and redistribute the food that way.”

Having conceived the model and persuaded Tesco to fund it, FareShare then set about finding the best technological solution, and evaluated systems from a number of countries. It finally settled on an app created by a Dublin-based tech start-up called FoodCloud.

“Rather than changing our own skillset and developing a whole new area that wasn’t our core competency, we partnered,” says Boswell.

Once the technology was in place, the next step was getting people to use it. “We put a huge amount of energy and effort into building relationships so that everyone would use the technology – not just the charities but the 320,000 people employed by Tesco.”

The FareShare FoodCloud app is loaded onto hand-held devices carried by staff in participating stores. Food which is approaching the end of its shelf-life is either discounted to clear or scanned into the device to be donated to charity. At the end of the day, a local FareShare FoodCloud member charity receives a text telling them about the available food. The charity sends a return text to confirm and then collects the food that evening and turns it into meals for people in need.

“The technology allows us to feed back to Tesco about how much food has been collected, what types of food and by which types of charity,” says Boswell. “We can measure impact in a really efficient and effective way. This is an important part of the sustainability of the project.”

The multi-million-pound project launched in stores in January 2016. One year later, 830 larger Tesco stores are using the FoodCloud app and have already donated enough food for over five million meals. By the end of 2017, all the smaller Tesco Express shops should be on board too – over 3,000 branches in total. And in January Waitrose signed up.

Risks were mitigated by several months of detailed trials, and the security of having Tesco as partner. If for any reason the project had to be terminated, the cost of releasing the 70 new staff that were taken on to run it has been calculated and ringfenced, so it wouldn’t impact on the core FareShare business. “We did quite a lot of financial modelling with the board and had lots of discussions around the risks of doing it and the risks of not doing it.”

Boswell adds that many of the local charities who have joined the FareShare FoodCloud project – for free – have also learned that bigger quantities of excess food can be obtained from the core FareShare service for an annual fee, so it has served as an effective marketing tool for FareShare’s core business.

“Our core business is growing by 40 per cent a year too. Our number of charity customers in the last year has more than doubled,” he said.