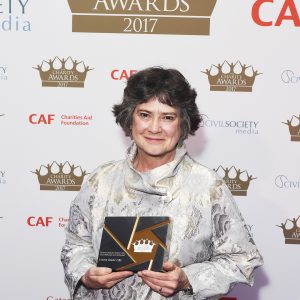 The award recognises an individual who has contributed throughout their life to the sector, not just in their working life but by volunteering and making a contribution to the thinking of the sector. The award is given out by Civil Society Media in honour of its founder, Daniel Phelan. Berry received the award last night from John Low, chief executive of the Charities Aid Foundation, the overall partner of the awards, at the Pavilion at the Tower of London.

In addition to her role as chief executive of the RVS – which was the Women’s Royal Voluntary Service when she led it, Berry has also held several other leadership roles, including executive director of the Charity Commission. But she was given the award largely for her outstanding non-executive CV, which in addition to the role at Breast Cancer Now currently includes five other trustee positions and three academic positions.

Berry has been a proponent of doing more to measure effectiveness in the sector, and has also spoken out strongly to say that charities must focus much more on growing civil society, on campaigning, and on building the confidence and voice of those marginalised by society.

“I’m extraordinarily proud to have been honoured with this award,” Berry said last night. “I hope it’s a recognition of having succeeded, with many others, in giving voice to issues I care about deeply. Issues like equality, social cohesion and building a just society.

“I’m glad too if it’s a recognition that there are many ways to contribute to civil society – not only as a chief executive of some fairly important organisations, but also as a volunteer, an activist, a campaigner and of course as a trustee.”

Berry spoke about the power of charity to hold society together.

“Civil society offers the opportunity to connect – to bring together the most unlikely partners to create something extraordinary,” she said. “It gives us the chance to use our expertise in creating networks, in building common purpose between different groups and different interests, in understanding other views, so that we can bridge the profound chasms in our society.”

But she also issued a challenge to charities to do more, and do better.

“Civil society has a privileged vantage point,” she said. “Our engagement with everything from education to opera, from the environment to health, from the consequences of the global refugee crisis, to the need for employment in small, forgotten communities, gives us an unrivalled access to what’s working, and what’s not working, in society and the economy.

“We know stuff, and, as long as we have the evidence, as long as we know the difference we want to make and chose to do what really works, and stop wasting time and resources on things that don’t – we have the most important opportunity there is: the chance to speak up and speak out. Speak, as they say, truth to power.

“If social cohesion matters, we need to be sure that we are not guilty of excluding swathes of society from our organisations. If empowerment and social justice are fundamental to our world vision, that may mean we need to give up power, or at least share it. If we want others to be accountable for their actions, we too must be accountable for ours.”