Ruth Sutherland CBE, who was chief executive of Samaritans for five years and held senior posts at charities including Relate, Alzheimer’s Society, Scope and Rethink, has been awarded the Daniel Phelan Award for Outstanding Achievement at this year’s Charity Awards. 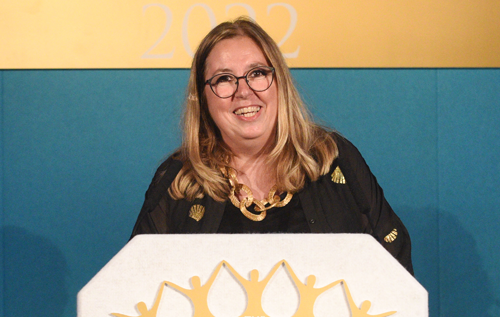 Sutherland was recognised for her long and impactful career in the charity sector, including her determination and persistence to modernise the governance and operations at Samaritans, a federated charity with 20,000 volunteers and more than 200 independent branches.

When she joined Samaritans in 2015, the charity’s governance model was complicated and unwieldy, including a board of 200 people that met twice a year. After a successful fundraising campaign to raise the £8m needed to put a transformation plan into action, Sutherland set about brokering a new relationship between head office and the branches, bringing more services online and introducing digital training for volunteers.

She also trained as a Samaritans listening volunteer, a role that she continues with to this day.

By the time Sutherland left Samaritans in 2020, income had increased 40%; nine digital projects had been completed; and volunteer learning and development had been overhauled including much more stringent safeguarding practices. A brand refresh helped to extend Samaritans’ reach to key audiences such as younger people.

She was awarded a Royal College of Psychiatry President’s Medal for her work with people with mental illness in 2019 and received a CBE in the 2020 New Year’s Honours List for services to vulnerable people.

Since retiring from Samaritans, Sutherland has remained a trustee of the Lloyds Bank Foundation for England & Wales, and only stepped down as a trustee of the Wildlife Trusts last year after six years. She chairs a Salford social enterprise and is a director of activism platform the Good Summit, and she continues to coach and mentor several rising stars in the charity sector.

Cathy Phelan-Watkins said: “No stranger to rule-breaking, Ruth has employed the rebellious streak of her early years to great effect throughout her career. Her refusal to accept the status quo has propelled her lifelong mission as an agent for change.

“A hugely inspirational exemplar of groundbreaking and powerful leadership, you could say that she has turned the demolition of boundaries into an art form!”

Sutherland collected her award alongside 10 category winners and the winner of the Overall Award for Excellence, Tommy’s, at a black-tie ceremony at the Royal Lancaster London, hosted by writer and broadcaster Ayesha Hazarika. Accepting the award, Sutherland referenced the famous quote of “faith, hope and charity” and urged the sector to do more to advance the greatest of these:

“My wish here is that we articulate and live by a new lexicon,” she told the audience. “We haven’t done enough to explain or demonstrate what charity is today.
“We must consign to history notions of benevolence, paternalism, deserving and undeserving of social control.

“To my mind, charity means humanity, what it is to be human. Human connection is so significant. The absence of it – social exclusion, discrimination, social isolation and loneliness – is so devastating to us.

“We need to be forceful with politicians, the media and the public that this is the new paradigm, not their Victorian understanding of what charity is.

“If we can’t, I fear charity itself will be consigned to history’s scrapheap; an artefact our children will have only read about in a Dickens novel.

“With this new meaning, charity becomes far less passive, discretionary – more a deliberate and necessary social action which we are compelled to take.”

About the Daniel Phelan Award

The Daniel Phelan Award for Outstanding Achievement is the only individual award given out, and the recipient is selected by Civil Society Media and approved by the judging panel. Ruth Sutherland joins an illustrious list of winners, including Sir Roger Singleton, Baroness Jill Pitkeathley, Dame Julia Unwin, Sir Nicholas Young, and Sir Harpal Kumar.

Daniel Phelan founded the Charity Awards in 2000. After he died in 2015, the organisers at Civil Society Media changed the name of the Outstanding Achievement Award to honour his memory.