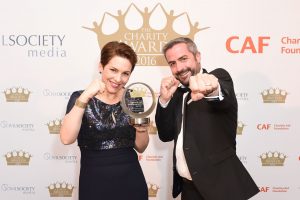 Out of the blue I received a letter from Civil Society Media inviting me to apply for the awards. The application form was straightforward and to the point, a bit like writing a funding application (the ones that limit you to 200 words for each section). I then promptly forgot about it and was surprised to see our name tweeted out on the shortlist months later. However the judging panel was a different level; I don’t think I’ve ever been given such a grilling, and so nicely, by people who understand the sector so well. After giving a presentation and answering questions for half an hour I left thinking that even if we weren’t successful it was a really challenging and insightful process, and if we did win, well then we really deserved it.

At the Mermaid Theatre we were stunned to hear the Boxing Academy announced as winners, and against such a quality field. We had a party of staff and board members present and it was very gratifying for me to be able to acknowledge their contribution publicly. All charities struggle at times with feeling isolated and under-appreciated so this was a timely injection of positivity for our staff and a wonderful way to thank to our supporters. And of course, we have a winner’s logo on our website now!

Anna Cain is chief executive of the Boxing Academy