When Crohn’s and Colitis UK talked to its service users about what they needed, the number one issue they raised was about urgent access to toilets. The charity’s members repeatedly reported that they had received verbal abuse for using an accessible toilet because they did not have a visible disability. 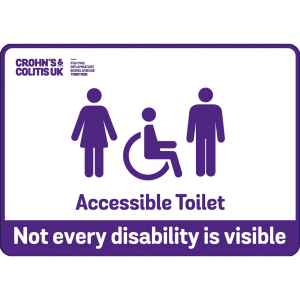 As a result, the charity launched its Not Every Disability is Visible campaign in 2016, and began a campaign to lobby supermarkets to change the signs they installed on toilet doors. After nearly 20,000 emails sent by over 5500 supporters to supermarket CEOs, the signage was installed in over 2,500 supermarkets nationwide in Asda, Tesco, Morrisons, Sainsbury’s and Waitrose, meeting all their targets for the campaign.

Outside of staff time, the entire supermarket campaign cost the charity just £500, which was spent on creating mock-up signs.

Following this success, the charity launched its Travel with IBD campaign in August 2017, using the same tactics to target the UK’s 27 largest airports, train stations and service stations. More than 2,500 of the charity’s supporters sent almost 50,000 emails to the CEOs of the 27 travel hubs.

For this campaign, which was entirely funded by pharmaceutical firm Takeda UK Ltd, the charity produced signage, but also did staff training and promoted its Can’t Wait Card, which sufferers can carry to show that they need urgent access to a toilet.

Some 21 of the charity’s 27 targets have either already installed or committed to install the signage including Heathrow, Gatwick, Southeastern Railways, and Roadchef.

And the campaign is now taking on a life of its own. Off their own back, supporters have also pushed for the successful installation of the accessible toilet signage across the country. The campaign has already reached football clubs, shopping centres, GP surgeries, leisure attractions and local councils, and looks set to continue to grow.