Ovacome, a charity which provides support and information for those suffering from ovarian cancer, saw increased demand when the Covid-19 pandemic hit. 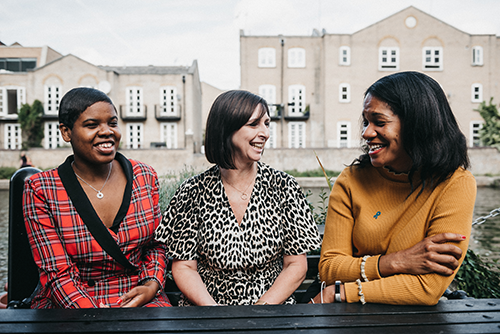 In the early weeks of the crisis, it experienced a 230% increase in requests for support and information across its services. It also had more safeguarding calls coming in to its support line (such as from people thinking about suicide) in the first three months of the pandemic than it had received in the preceding three years.

It responded quickly to the reality of operating during a pandemic. On 17 March 2020, the charity launched its Staying Connected online support service. It later invited 46 organisations to partner with it to reduce duplication and reach those most in need. The programme offers regular support groups, workshops and clinical talks from experts in the field. To date it has run 572 sessions, reaching 5,574 participants.

A crucial aspect of Ovacome’s response was to ensure that support and information were available to underrepresented groups (such as those diagnosed aged over 70, people of colour, LGBT+ individuals, those in poverty and those without English as a first language) which it had identified in a 2018 “mapping and gapping” exercise.

Some of the ways it did this were to launch support lines in six different languages, offer transcriptions of its sessions and supply bursaries to assist with phone or wifi costs.

It also launched a targeted campaign and resources for trans men highlighting the need for them specifically to be aware of the symptoms and treatment options available. The charity diversified its imagery and removed gendered language from its resources wherever possible too.

Charity Awards judge Rachel Cockett said she was particularly taken with Ovacome’s co-production with service users and its work to support its staff to deal with the online abuse they were getting because they were supporting underrepresented groups. “It really felt like they carried all their values throughout their work,” she said.

Chris Sherwood said Ovacome was addressing barriers to accessing cancer services from people who tend to get left out. “From an intersectionality and equality, diversity and inclusion perspective it was a really interesting project,” he said.

Priya Singh said it was a particularly impactful and topical project in the current circumstances of long healthcare waiting lists. “People who are more disadvantaged in the healthcare system are more likely to experience those delays, which can negatively impact their healthcare outcomes.”