Research has shown that people bereaved by suicide are at higher risk of suicidal thoughts or attempts to take their own life and that this can last for a number of years following the initial suicide. Furthermore, the contagion appears to be stronger among adolescents, making the need for targeted intervention in education settings even greater. 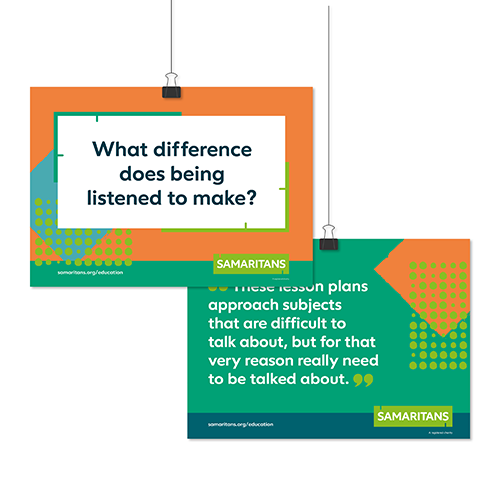 Samaritans set up the Step by Step postvention service in response to this need, supporting education establishments such as schools and colleges to prepare for and respond to suicide.

Work began on the project in 2007, with a pilot response service for secondary schools set up in five Samaritans regions in 2010. The following year it was expanded to be organisation-wide, and a pilot project began with universities in 2016.

The service is led and run by up to 60 volunteers. In 2019 it supported 130 requests for support from schools, colleges, universities and other youth settings, bringing the total number of requests since it was founded up to 810. Given that there are six people who are “intensely” affected and around 60 who are “deeply” affected by every suicide, the service can be estimated to have helped more than 48,000 people.

Feedback has been positive. One person said that “a whole weight had been taken off us”, while another said: “The speed of your response was just amazing”. A third said: “They didn’t wait to see how we coped, they were here straight away, and in hindsight, this was really important.”

“They worked out that for every suicide six people are intensely affected and 60 are deeply affected. One can only imagine the ‘ripple in a pool’ effect of the trauma, which can even lead to copycat suicides among young people. This seemed very innovative, I haven’t heard of anything else like this that’s tried to deal with the wider impacts.”