Surviving Economic Abuse (SEA) had already been part of the coalition that persuaded ministers to make economic abuse a crime as part of the Serious Crime Act 2015. But it also followed this up with a new campaign to ensure that financial coercion and control by ex-spouses and partners also constitutes criminal activity. 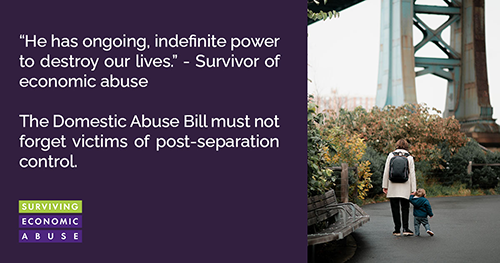 One in six women in the UK has experienced economic abuse from a current or former partner. Yet, the law offered no protection for those experiencing abuse after a relationship has ended.

So, SEA launched a new campaign to amend legislation to extend the coercive or controlling behaviour offence to include post-separation abuse.

It worked with survivors to build the evidence base that was submitted to the government’s review of the Act; identified and targeted parliamentarians across all parties to champion the amendment, and launched a public communications and media drive to support the campaign. SEA also worked in partnership with other charities including Women’s Aid and SafeLives to consolidate wider sector support, and created 18 case studies from the lived experience of survivors.

In March 2020 the Domestic Abuse Bill was reintroduced to parliament following the 2019 general election, offering the ideal opportunity to include post-separation abuse. SEA drafted a proposed amendment to this effect and targeted potentially sympathetic MPs.

As the legislation moved to the Lords in the final stages of the campaign, SEA hired a temporary public affairs adviser to increase capacity for a final push.

On 1 March 2021, the government announced that it would include the amendment to the Bill that SEA had called for, a change that will benefit millions.

Charity Awards judge Rachel Cockett said the campaign achieved its mission and contained all the elements to make it a success, including strong survivor involvement and evidence-based influencing.

Judge Paul Streets added that SEA demonstrated good partnership working and that the intervention was well-timed with domestic abuse high on the public agenda.