The Albany is an arts centre based in Deptford, southeast London that provides a range of creative experiences for the diverse local community. Meet Me at the Albany is a pioneering programme of arts engagement activities for the area’s most vulnerable elderly residents. 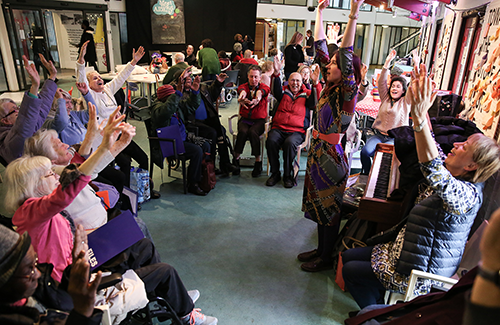 Meet Me at the Albany in The Albany cafe. Credit: Roswitha Chesher

Lewisham Council approached The Albany, and another local organisation Entelechy Arts, to try to improve services provided by day care centres in the area. Together the organisations created a programme based on evidence that participating in social groups reduces the risk of premature death and physical and mental ill health.

A weekly group was set up in 2013, employing the skills of a pool of experienced artists recruited to lead the sessions, and volunteers. The programme, which runs for 50 weeks of the year, has evolved to include a range of activities from jazz performances and poetry writing sessions to a dementia-friendly film club. The project has around 1,400 attendances each year, as well as engaging over 200 older people across the wider programme. There is also a home-visit initiative.

New funding opportunities has allowed the organisations to expand the programme and launch in the south of the borough. This year Lewisham Council has commissioned The Albany to produce the Age Against the Machine three-week event in the autumn to raise public awareness of the positive impact of arts engagement on the elderly.

Meet Me at the Albany has been cited as a pioneering example of how communities and arts organisations can support older people to live happier, healthier and more independent lives.
Charity Awards judge Cathy Phelan-Watkins said the project was “very good value for money compared to your average day care costs”. She was also impressed that 60 per cent of the charity’s income was earned.

Su Sayer said it was “a different model of preventing loneliness in old age”.