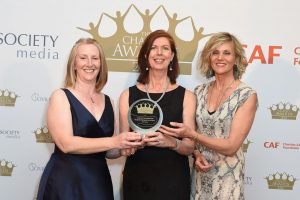 Over 25 years of delivering fantastic experiences for children and families at Eureka! The National Children’s Museum, there have been many projects which have helped us sustain our audience levels and maintain fantastic relationships with our visitors.

Eureka! and Linda BarkerOne of these is Helping Hands. Initially a three-year project funded by the Esmée Fairbairn Foundation, the aim was to achieve significant cultural and organisational change which resulted in embedded sustainable inclusivity throughout our organisation for families with a disabled child.

The programme is now in its fifth year, and continues to improve access for disabled children. Subsequent to the completion of the three-year funded Helping Hands programme, our commitment to engaging with disabled children has continued under the title Access All Areas. Esmée Fairbairn and a number of additional funders have seen the value in the work we are undertaking and have supported its continuation.

Throughout the programme, recognition from Visit England has been an ongoing source of support and encouragement; winning the Bronze ‘Access for All’ Award in 2013, the Silver in 2014 and the Gold Award in 2015 in recognition of the work we’re doing within the cultural attractions sector for disabled children.

In 2016 we were looking for a way to celebrate the achievements of the original programme and the subsequent expansion of the project, to thank our supporters and recognise the hard work of our staff and to continue to talk about the importance of improving access to cultural experiences for disabled children and their families. Then into my inbox dropped an email from the Charity Awards…

Eureka! had never submitted a project to the Charity Awards before, but the idea was met with huge enthusiasm internally.

This was only dampened slightly when the application process was reviewed… Putting together any kind of awards submission, funding application or partnership approach takes a significant amount of time and effort, and in an organisation where everyone is working to capacity, you have to be sure it’s the right thing to be spending your time on. It wasn’t a decision we took lightly.

Getting on to the shortlist was hugely exciting and, to be honest, if that is as far as we’d got we’d have been very happy. It is in itself a great achievement and something which would have helped us enormously for future fundraising and profile-raising.

The shortlisted charities in our category were stiff competition, and in recognition of the fact that all three organisations were based in West Yorkshire, we reached out to each other via social media to produce joint press releases and wish each other the best of luck. More new relationships built!

Our chief executive and I headed to London for the awards ceremony. We felt we were the long shot to win in the category of Arts, Culture and Heritage category, being up against fantastic programmes from Unlimited Theatre and Northern Ballet. So convinced were we that one of the other organisations would be called, we both wore completely inappropriate shoes for walking down the stairs!

When we were announced as winners, we made it down the stairs (just), and the rest of the presentation kind of flashed by, to the point where we found ourselves asking later in the evening… ‘did that really just happen?’

It was such a brilliant evening after that the first thing we did was let everyone back at Eureka! know, and let Twitter and Facebook flood with congratulations which were lovely to read the following day on the train back home and over the subsequent weeks as the news was announced.

We now proudly display the Charity Awards winner logo on our website, our email signatures, and everywhere we can, including within the museum so all our visitors can see it. As an immediate tangible result we were invited to put in an application to a funder who has not previously supported Eureka! (which we are nervously awaiting the outcome of…).

But perhaps the most significant outcome of the award has been the ability to show all our staff at Eureka! that what they do is brilliant, and recognised at the highest level. As I said at the beginning, we are proud of many things we do… and we are proud of the people who work here who all help us achieve these things. There’s nothing better than being able to let them know that other people recognise their achievements and are proud of them too.