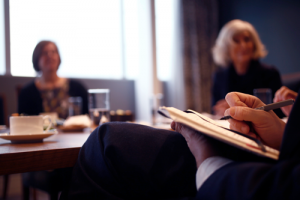 In 2017, Who Cares? Scotland won an unprecedented commitment from First Minister Nicola Sturgeon – to undertake a wholesale review of Scotland’s care system, the first for 150 years. And, at the urging of the charity, she promised to put love at the heart of the review and pledged to personally listen to the stories of 1,000 care-experienced people. This was a momentous victory for the 40-year-old advocacy charity and its 1,000 Voices campaign.

Theirs was just one of the fantastic initiatives that were honoured at last year’s Charity Awards. Given the standard of the winners, we decided to gather three of the recognised charities for a discussion on what makes a high achieving charity. And despite their differing activities and causes, we found that there were a number of common themes.

Listening and giving agency to beneficiaries 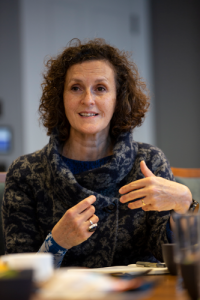 All three charities emphasise the importance of listening to their beneficiaries and letting them help shape the service they receive. In every case, the vision for the project came from the beneficiaries telling their stories and somebody actively listening to what they needed. Listening without judgement is a key skill of Redthread’s frontline youth workers, who work in hospitals with young victims of violence such as knife crime to help them pursue positive changes in their lives. “They often start the conversation by saying, ‘I’m just a youth worker,” says chief operating officer Jenny Baker. “Not a probation worker, not a social worker, not the police, just a youth worker who is here for you if you want to talk.’ There’s no pressure, it’s up to them if they want to engage.”

The Christian anti-poverty charity Tearfund is comfortably the largest organisation in our group, but trusts team manager Lynda Wilson emphasises that Tearfund’s projects are always determined by local communities themselves. “People assume that because we are a big international NGO we have a blueprint that we use to replicate stuff over and over, and tell people what we’re going to do with them. But that is not our approach at all. We sit with each community and ask what their issues are, what’s going on for them, and then we support them as they work out what they are going to do with their resources to change things.”

Duncan Dunlop, CEO at Who Cares? Scotland, agrees it is crucial to enable beneficiaries to feel like they are in control. “In our advocacy work, our advocates say to the young people, ‘you’re my boss, I have to say what you tell me to say. I work for you in whatever way you want’. It’s about giving them the power, so that they can buy into whatever you’re offering them on their own terms.” 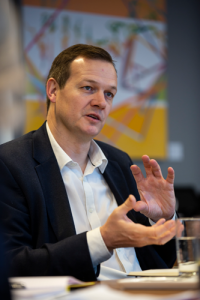 Ambition, both for beneficiaries and the organisation, is also important. “We try to empower people to raise their expectations for what they might achieve,” says Dunlop. “We always ask, are you lifting your head high enough? It’s the same for us as an organisation as well. We talk about seeing lightbulbs as stars – don’t go reaching for that lightbulb, you should be aiming way beyond that, all the way to the stars. Our strategic vision is deliberately ambitious: a lifetime of equality, respect and love for care-experienced people.”

Wilson says helping people to realise their full potential is also a familiar narrative at Tearfund: “Our strategic vision is huge, too: all people freed from poverty, living transformed lives and fulfilling their God-given potential.”

In terms of service design, providing intensive personal support to individuals has proved to be an effective tactic at all three organisations. Redthread’s youth workers work on a case-by-case basis supporting each young person, before aiming to connect them with other agencies for ongoing longer-term support. Tearfund’s South African project started with one local champion who worked with a small group of women to create a safe space to start the conversation. And while Who Cares? Scotland does not provide care services itself, it does provide advocacy to children and young people in care on a one-to-one basis. Also, a few years ago it started a membership scheme for care-experienced people to enable them to connect with each other and the organisation, and receive benefits such as invitations to events and a handwritten birthday card on their birthday. Marie-Claire Jones, director of fundraising and development at Who Cares? Scotland, says this personal touch on their birthday consistently rates as one of the most valued benefits among members. 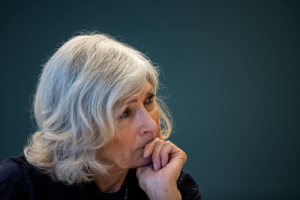 Giving power and control to staff is another common theme that emerged from the charities. “There’s a really interesting dynamic around understanding the power you need to make change happen, but not controlling it,” says Dunlop. “Too many organisations are too hierarchal. So many brilliant organic things have happened in our organisation that I had absolutely nothing to do with; I didn’t get near the decision. Our staff have full permission to go and do good stuff.”

All three charities agree that their staff love what they do, and all three try to be good employers. A recent staff survey at Who Cares? Scotland showed that everyone felt they were contributing directly to the implementation of the organisation’s strategic plan. Redthread’s Baker adds: “I’d hesitate to say we’re a brilliant employer because there’s always more you can do, but our staff love what they do and learn a lot and have great opportunities.”

Being a learning organisation 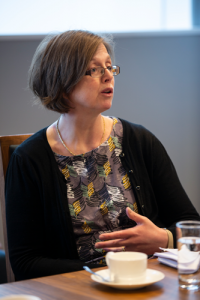 Continual learning is another theme that emerged. Baker says Redthread has formed the HIVE (Hospital Interrupting Violence Exchange) Network with the three other organisations in the UK doing similar hospital-based work, to learn from each other and help to define a consistent message about how the problem should be tackled. Wilson says Tearfund takes learning from different countries and brings it into play in other contexts. “For example, we’re no longer supporting this project in South Africa because it’s now self-sustaining, but we are looking at how we might use the same model elsewhere, in DRC or Myanmar; or can we use it in Mali to address issues of FGM?

“We have a thematic support team in head office who have expertise in water and sanitation or sexual violence or peacebuilding, and we’ve also got a monitoring, evaluation and learning team, but there’s also a lot of learning and collaboration between the regions directly – not everything has to come through London.”

Ensuring the charity has lived experience of its issues right through the organisation is key for Who Cares? Scotland. It has a target of 30 per cent care-experienced staff, and it is written into the charity’s constitution that at least five trustees must be care experienced – currently six are, out of 13. Says Jones: “We regard their knowledge and insight to be just as important as knowledge and experience in HR, finance, fundraising and social care, which are also represented on our board.” The board is also expected to take part in at least two or three of the charity’s annual events for care-experienced people, such as its Love Rally or summer camp, and once a year the whole staff and board go away for two nights for an intensive strategy event.

Dunlop adds: “There’s a real expectation that our board is present in our work. We want our trustees to see the quality and health of our organisation because this helps give them confidence in what we’re doing, rather than just being at the pinch point in an hourglass – the CEO and SMT can tell a board what goes on in reports or at board meetings but witnessing and feeling what’s occurring is much more important.”

To date, Redthread has not had board members with experience of violent trauma but is currently looking to add new trustees and Baker says beneficiary representation is a high priority. At Tearfund, the trustee board reflects the diversity of its UK supporter base in terms of church background, gender, age ethnicity and geographical location, says Wilson. 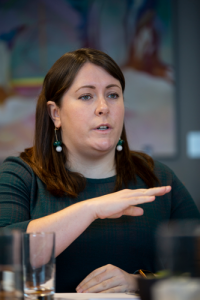 Marie-Claire Jones, director of fundraising and development at Who Cares? Scotland

All three programmes of work undertaken by our winners aim to address complex and entrenched problems, and involve working with people who are highly vulnerable. It’s a difficult and risky business, requiring ambition and innovation but also robust systems and procedures. What are their top tips for achieving this balance?

Baker says that not compromising on what you need to be effective is a key tenet of Redthread’s success. “We now know the optimal size of each team that we need in each hospital, but that’s expensive so it’s tempting to wonder if we could make do with fewer people. But then that puts too much strain on the rest of the team, so you learn where you just can’t compromise.”

Dunlop says you have to be prepared to take risks if you want to achieve change. “Supporting care experienced people to share parts of their life experiences with any audience is risky. But hearing their personal story gives real life perspective, which enables people to feel the issue. Once they feel the issue they are motivated to make change.”

Effective storytelling is even more important than presenting data when it comes to getting funding, the charities say. “We find stories are very important,” says Wilson. “Facts can only take you so far.” And Dunlop adds: “Funders are desperate for solutions to problems that have been around for a long time, so if you can give them something new, a very different way of approaching an issue, there’s interest. They want to see vision and leadership.”