Battersea, the cats and dogs charity, was concerned that one of the main drivers of animal cruelty is the weak six-month maximum prison sentences given to perpetrators in England and Wales – the lowest across any of the 100 jurisdictions the charity surveyed. 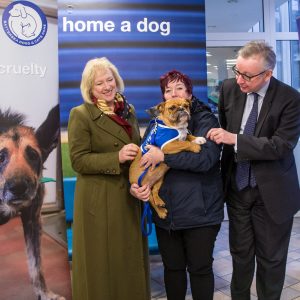 The charity argued that this was disproportionately low when contrasted to non-violent crimes such as fly-tipping, which now carries a five-year sentence.

Battersea’s campaign was designed to create political change by giving facts about animal cruelty to members of the public and encouraging them to talk to their MPs.

The campaign aimed to raise sentences for animal cruelty from six months to five years, and launched in conjunction with a Private Members Bill from Anna Turley MP pushing for five-year sentences. It gathered support from parliamentarians, attracted interest from celebrities, and persuaded tens of thousands of members of the public to email their MPs – smashing campaign targets for public interest. The campaign gathered widespread media coverage, including front pages in national newspapers, and in September 2017 achieved its first victory, when the Scottish Government announced support for five-year sentences.

In December the campaign achieved its goal, when the environment secretary Michael Gove launched a draft animal welfare bill, committing to five-year sentences, at the charity’s premises.