The Centre usually directs its personal safety and self-defence courses at survivors of domestic violence, but it was prompted to develop a course for the blind and visually impaired after reading that these individuals are more than twice as likely as sighted people to be attacked, and often live in fear. The course, which combines personal safety advice with practical self-defence skills and counselling techniques, was developed in consultation with two blind men, both of whom were so inspired by the confidence they gained that they themselves trained to become course instructors. When delivering the course, they do not immediately divulge their blindness to trainees, only revealing it if a participant complains that their own disability is preventing them from making progress through the course. 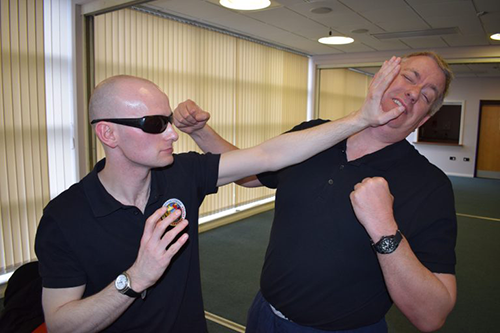 The training is offered free of charge by 11 volunteer instructors through the charity’s own centre, and through four more partner charities. In the first 18 months since the course opened, 941 blind and visually impaired people have undertaken the training, and a further three blind people have passed their instructor exams.

All participants reported feeling empowered by the training and better able to leave their homes unaccompanied, even if for short periods. The charity, which is run entirely by volunteers, is also making a DVD to make the training available to others.

The course, believed to be the first of its kind in the world, cost just £3,600 to develop – the cost of travel expenses and lunches for volunteers. Its architect, Alan Bell, the Centre’s volunteer manager, is now replicating the techniques learned to devise similar courses for people suffering from dwarfism and deaf or hard of hearing people.

Charity Awards judge Mandy Johnson described the project as “super exciting, with loads of innovation” and Ruth Davison said it was “just amazing the way they co-created the courses with blind people and then got the blind people to deliver the training”.

Judge John Low said it was “one of those charities you just want to tell people about because nobody will believe it exists”.

The Core Sport programme offers its members the opportunity to participate in over 15 different sporting activities and exercise classes, six days a week. The sport is combined with regular health checks and weight management programmes and each attendee is given one-to-one support with personal targets and an action plan. Core Sport also arranges one-off sport-specific excursions and trips to watch live events. There has been a 75 per cent reduction in GP visits and use of emergency services by members, and 100 per cent have said their mental and physical health has improved. More than two-thirds have taken up regular exercise outside the Core Sport programme. Some members now volunteer for the programme and some have gone on to get jobs in the sports industry.