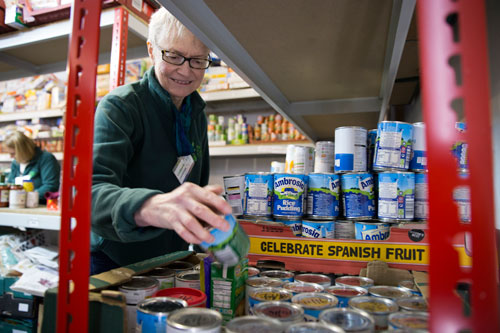 Having been made aware of the problem of “hidden hunger” by a local mother, the Trust’s founders Paddy and Carol Henderson launched the first Trussell Trust foodbank from their garden shed in 2000. They went on to develop the principles that hold firm today: all food should be donated and volunteers should be enlisted to administer the food and provide non-judgemental emotional support.

After three years, the pair hired a professional to collate their knowledge into a ‘Foodbank Manual’, which was to be the foundation of the Trust’s social franchise model. The first associated foodbank was launched in Gloucester in 2004, and the Trust gradually built up a team of three regional managers and 16 regional development officers.

From these humble beginnings, the network now comprises 424 foodbanks running over 1,200 distribution centres with the help of more than 40,000 trained volunteers. Each foodbank is supported by a network of around 25 educational establishments, 30 churches, 25 businesses and around 80 frontline professionals, who refer clients to the foodbanks. Each foodbank is either a charity in its own right or is run by a charitable organisation such as the church. Foodbanks are responsible for their own governance and fundraising.

In its first year, 2004, the Trust’s one foodbank distributed 16 tonnes of emergency food to 1,746 people in Gloucester. Eleven years later, 414 foodbanks dispensed 8,624 tonnes of food to more than a million people across the country. Some four million people have donated food.

The Network has forged partnerships with national businesses which provide foodbanks with benefits that would not be available to them on a local basis. For example, every foodbank has the opportunity to benefit from food collections at their local Tesco store, through permanent collection bins and up to four one-day collection events, and these are topped up by a cash donation from Tesco in proportion to the goods collected.

The Trust has developed data collection systems to record the activities of each foodbank and enable it to produce overall performance measures for the Network. Information collected includes the age and ethnicity of clients and the primary reason for their referral to the foodbank. Thanks to this system, the Trust has the best national data on food poverty in the UK.

The charity uses this evidence base to lobby government agencies on benefits and other policies, and recently successfully persuaded ministers in Northern Ireland to adopt some changes to the new Universal Credit after it had caused problems in the rest of the UK.

And in 2014 it launched a new programme, ‘More Than Food’, which brings other support services into foodbanks, as research had shown that foodbanks’ signposting to other agencies had had limited success. Now the Trust is partnering with other charities and services to offer advice on benefits, housing, budgeting, even legal advice, from within its foodbanks.

The guidelines and processes required by the charity are so comprehensive that some foodbanks have been unwilling to comply and have left the Network.

Charity Awards judge Paul Farmer described the programme as “21st century charity writ large”. Andrew Hind said the Trust’s campaigning approach was “very constructive”. And Martin Edwards said it was a “really inspiring example of charitable impact and influencing” and was the “clear winner on innovation and impact”.