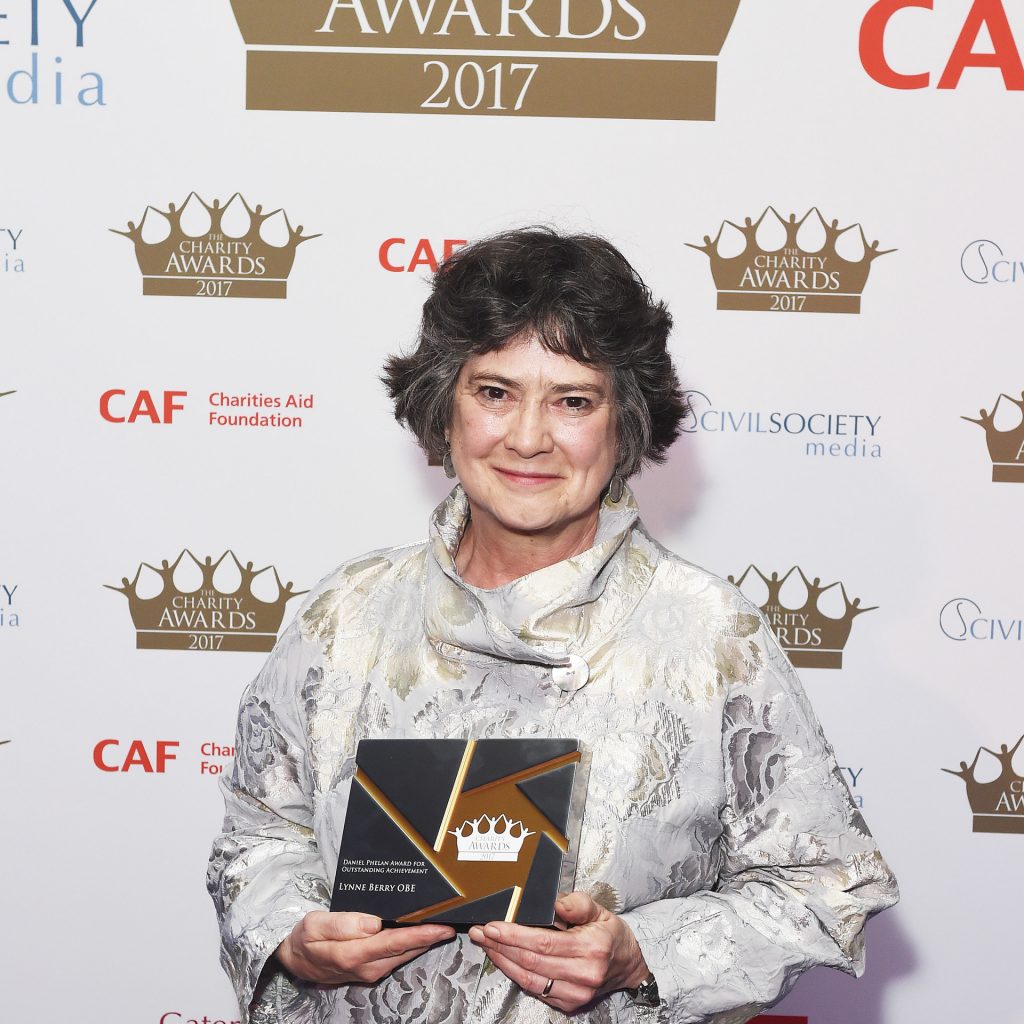 Lynne Berry has held top jobs at quite a few of the sector’s most recognised organisations. Most notably, she led the Charity Commission and Women’s Royal Voluntary Service.

But Berry’s most exceptional contribution to the sector is perhaps outside the workplace, in her formidable non-executive CV. She is the chair of the newly-formed Breast Cancer Now, vicechair of the Canal and River Trust, chair of the Commission of the Voluntary Sector and Ageing, a fellow at Lucy Cavendish College in Cambridge, an honorary fellow at Cardiff University, a professor at Cass Business School in London, and trustee of four other charities.

Berry describes herself as “still a community worker at heart” and says she has tried to contribute not just through her day job, but “as a volunteer, an activist, a campaigner and of course as a trustee”. She believes that movements and communities, not big organisations, are the real heart of the sector.

Charities, she says, must be inclusive and must speak out for the voiceless. They must do more to demonstrate and prove that they are effective, and that they continue to deserve the public trust. Berry has always been involved in the sector, since fundraising as a child. “The themes have stayed the same,” she says. “Social justice, inequality, and people who don’t have a voice.”

She qualified as a social worker, and worked in Wandsworth, then became a community worker in Camden. After work in academia and the civil service, her first chief executive job was at the Family Welfare Association, now known as Family Action.

“I discovered a cash crisis and a leadership vacuum,” she says. “My time there was spent trying to find a focus for an organisation which had lost its way, but also lost its money. “The approach quickly changed. I thought any sector which could change so rapidly had real energy and commitment.”

Berry became involved in NCVO as a trustee, and worked on the Deakin Report, which drove thinking about the sector for many years.

“For me, the thing that I found really attractive was the idea that our voices together were much bigger than any one organisation,” she says. “We had a powerful voice and we could speak together. We could challenge others and move the centre of power.”

From there she moved to the Charity Commission, where she says she tried to shift the focus from a technical assessment of charity law to the broader one of public trust and confidence.

Berry worries about the Commission today. “It’s very underfunded,” she says. “People expect it to have the resources of a big economic regulator. It has the burden of phenomenal expectations, but less than phenomenal funding. “It’s a difficult sector to regulate. Everybody wants the Commission to come down hard and prevent wrongdoing, but this is a very independent sector. It needs space to operate.”

‘The idea is to change the world’

Since leaving the regulator, Berry has spent much of the rest of her time in campaigning roles, both inside and outside the sector, and she is keen for the sector to continue to advocate. “I feel very optimistic about social activism,” she says. “Technology means our voices can be stronger.

“The idea isn’t to interpret the world. The idea is to change it. Before Shelter brought homelessness to people’s attention, for example, no one thought it was a big issue. Charities have a role in identifying social problems and putting them on the agenda.” As leader of the Equal Opportunities Commission she campaigned for the rights of women to equal pay.

“What I learned was that you have to focus on the people who can make the difference,” she says. “In that case, it was business owners. Unless we could find leaders among employers, it wasn’t going to make a difference.”

In her next job at the General Social Care Council, she fought to have social care workers have the same recognition as healthcare workers – a battle which is still going on, a decade later.

And in her final full-time role as chief executive of WRVS, she spent her time seeking recognition for older people.

“I got really cross with the ageism which says that older people don’t make a social or an economic contribution,” she says. “Older people just weren’t getting taken seriously for the fundamental contribution they made.”

The voluntary sector, she says, is as ageist as anyone else.

“One of the most important things I’ve done is the Commission on the Voluntary Sector and Ageing,” she says. “At WRVS I heard a lot about ‘little old ladies’ but these were actually incredibly skilled people who were keeping the country and community functioning. The sector depends on the volunteering of the old.

“The sector is focused on getting more young volunteers. Well, what about old volunteers? Don’t assume the next generation is going to be as understanding at this one has been.” She also questions the focus on reducing the age of charity boards.

“What’s wrong with having a board of people in their 60s and 70s? They want to contribute. They have fundamental skill and expertise built up over a lifetime. And they have the time. It’s much more important to have diversity of views and backgrounds than of ages.”

Berry herself is emblematic of the volunteering generation. Since leaving WRVS, she has “gone portfolio”, with a bewildering array of trusteeships, memberships and academic posts.

One of her key themes is encouraging cross-sector collaboration.

“You can’t get things done by just prodding from the outside,” she says.

“You need to convince those with the real power that they need to make those changes happen. That’s what’s happened at the Canal and River Trust – this extraordinary transfer of public assets into the voluntary sector.

“It’s shown the strength of the sector. As a charity it can grow profile and engage volunteers. It’s far more effective now.”

Her highest profile role, though, is at Breast Cancer Now, formed by the recent merger of Breast Cancer Campaign and Breakthrough Breast Cancer. She is sure the merger will be judged a success.

“Some of the pink fog is already beginning to dissipate,” she says.

‘Some things work and some don’t’

One of Berry’s key messages to the sector is that it has to prove it is making a difference. Here she believes the focus of charity law is in the wrong place. While there are careful prescriptions for how charities must report the flow of money, there are few rules about how they must communicate their social impact – only boilerplate public benefit statements.

“It’s odd that there is nothing in law to require charities to demonstrate their impact,” she says.

Berry is involved in Pro Bono Economics, where some reporting standards are being developed to help charities assess whether their work is really effective.

“Some things work and some things don’t,” she says. “You need to know which is which. What is worth continuing your investment in?”

‘Don’t always look to the state’

So what has been the biggest change in charity since Berry began her career?

“A sense of confidence,” she says. “Charity believes in itself. And when I started, there wasn’t the same sense of a sector, just individual organisations.

“But I think the sector has too often looked to the state for the solution. Too often we’ve wanted to identify the problem and ask government to fix it. We should be trying to solve things ourselves. We can do things government can’t do. We can tap into people’s knowledge and expertise and skill. We should stop complaining and try to sort it out ourselves.

“Also, we’ve been so focused on the state we’ve neglected other parts of society. We have other hearts and minds to win.”

‘Could we be better?’

Berry is keen to make the sector stronger.

“Things are good in the world of charity,” she says. “Despite the recent issues with public trust, most people’s experience of charity is positive most of the time. The sector does some things incredibly well. But my question is, could we be better?”

Charities, she feels, aren’t engaging as well as they could with the public.

“It’s about movements, not organisations,” she says. “It’s about civil society, not charity.

“We need a society in which people can contribute, in which they feel empowered and engaged, in which they feel they have a voice. There are an awful lot of people who just feel ignored. If we’d succeeded in building a strong civil society, people in the UK wouldn’t feel so marginalised.

“I would like to see the sector do more about making sure that people have a voice. I would like charity to be less issue-based, and more about capacity-building.”

At root, however, she remains proud of her sector, and her career in it. “It makes me incredibly proud to win this award,” she says. “Because this is a sector I’ve put my heart and life and energy into, and I hope I’ve made a difference. I feel very proud that’s been recognised. And it sets me up to do even more.”