Based in Leeds, Touchstone is a mental health and wellbeing charity that works to eliminate health inequalities amongst underserved and marginalised groups. When lockdown hit, a number of vulnerable people it worked with reported that food poverty was a huge issue, yet there was no local foodbank. 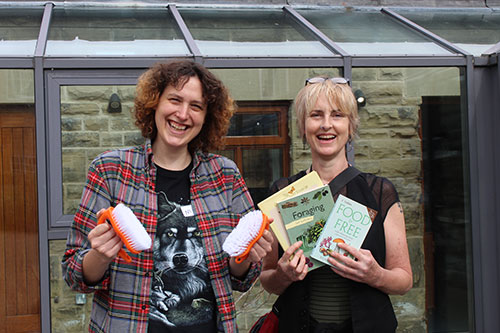 Touchstone realised that people could not access its mental health services without their basic needs being met first, so the staff started collecting food donations from colleagues and family members to give out emergency food parcels.  In days this had turned into a full-blown foodbank and mental health support service and within four weeks Touchstone Loves Food (TLF) was feeding 200 people each week.

The vast majority of the target service user group lived in the top 10 most deprived areas of Leeds.

“TLF became our Trojan horse to mental health and wellbeing support to communities too distracted by hunger, poverty and distress to be able to think about looking after themselves,” said the charity’s chief executive, Alison Lowe.

Support staff that normally worked with older people in care homes and were facing being furloughed were instead redeployed to do mental health support calls and to collect, pack and deliver food parcels to people’s homes. Risk assessments of each part of the process had to be developed from scratch to keep staff and volunteers safe, and as a result of this, the TLF service had to be moved to a different building to enable social distancing and better ventilation.

In the first few months of TLF, Touchstone funded the food purchases using its reserves but this soon became unsustainable. Despite never having fundraised before, the charity’s staff developed a fundraising campaign that raised over £200,000 from public, corporate and lottery donors. This enabled Touchstone to employ five staff to keep TLF going until the end of October 2021.

TLF also attracted new volunteers among people who had been furloughed and past service users.

By the end of the 50th week, TLF had delivered 236,221 meals to 1,148 households. Leeds City Council provided 20 drivers to support delivery throughout the period.

As well as delivering over 400 hours of intensive mental health one-to-one telephone support, the team gave support and information to over 4,000 contacts and made around 12,000 check-in welfare calls. It undertook data collection of all beneficiaries and have fed back the themes emerging to local authority commissioners.

Access to its services also increased during the year with 130 new referrals to Touchstone from TLF recipients.

The charity was open about the lessons it learned, admitting that its lack of a clear exit strategy meant some people began to depend on the service when it should have built-in self-reliance and routes to follow-up support.

“We have taken all the health and safety lessons into all our services and buildings now,” said Lowe, “and we think about exit at the start of all relationships with service users.”