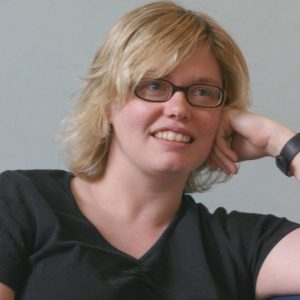 Sarah Ellis is an award-winning producer currently working as director of digital development for the Royal Shakespeare Company to explore new artistic initiatives and partnerships.

The latest partnership for the RSC is the Audience of the Future Live Performance Demonstrator funded by Innovate UK – a consortium consisting of arts organisations, research partners and technology companies to explore the future of performances and real-time immersive experiences.

In 2017, she became a fellow of the University of Worcester for her work in the arts and technology. In 2016 she was awarded The Hospital Club & Creatives Industries award for cross-industry collaboration for her work on the RSC’s The Tempest in collaboration with Intel and in association with The Imaginarium Studios.

In 2013 she was listed in the top 100 most influential people working in Gaming and Technology by The Hospital Club and Guardian Culture Professionals. In partnership with Google, she produced Midsummer Night’s Dreaming winning two Lovie Awards for Innovation and Experimentation.

In 2012, she produced myShakespeare an online commissioning platform for the World Shakespeare Festival. In 2011, she produced Adelaide Road for the RSC, which mixed live performance with an app and website map.

As a spoken word producer, she has worked with the Old Vic Tunnels, Battersea Arts Centre, Birmingham REP, Contact, Improbable, Southbank Centre, Soho Theatre, and Shunt. She has been head of creative programmes at the Albany Theatre and programme manager for Apples & Snakes.

She commits to the development of the arts and technology sector by being a mentor and advisor to programmes such as the Sundance Institute’s New Frontier Labs, Creative XR programme supported by Arts Council England and Digital Catapult and CPH:LABS.

She is a regular speaker and commentator on digital arts practice, as well as an Industry Champion for the Creative Industries Policy and Evidence Centre, which helps inform academic research on the creative industries to lead to better policies for the sector. She has been appointed chair of the digital agency, The Space, established by Arts Council England and the BBC to help promote digital engagement across the arts.