“I was dominated by feelings of worthlessness. I just had no self-image left and a part of me was lost. When I looked in the mirror, I used to see a worthless person. Joining the support group was like finding a new family. After six months of attending my support group, my life changed. I’m alive again.” 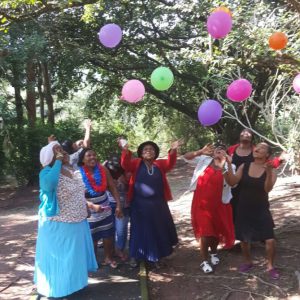 These words, from a rape survivor, typify the challenges faced in South Africa, which has rates of violent crime well above those of comparable countries. More than a third of South African girls face some kind of sexual violence before they reach the age of 18.

Tearfund initially became aware of this problem through its work on HIV, and decided to engage further by listening to the experiences of female survivors in KwaZulu-Natal. This province was chosen for its extreme social and economic inequalities, and for its high proportion of men admitting to perpetrating gender-based violence (an enormous 46 per cent).

The project was built around what survivors themselves saw as priorities: to have a safe space to reflect and heal, to be able share their stories with others who had faced a similar ordeal, and for their leaders to speak out on the issue.

The result is a fully-fledged support network. Across KwaZulu-Natal, a locally-owned, shaped and sustained movement is now supporting 547 survivors, with 21 volunteering as “champions” across 150 safe spaces.

Some 90 per cent of survivors said they had spoken out for the first time, improvements were recorded to survivors’ quality of life were recorded across a range of physical and mental indicators, and engagement with the issue among faith leaders increased. The charity is now stepping back from its role in South Africa, and exploring how it can take the same intervention into other countries.