Every year in the United Kingdom there are as many as 60,000 out-of-hospital cardiac arrests, with as many as 90 per cent of those resulting in a fatality. Sudden death from cardiac arrest remains one of the leading causes of death in the UK. 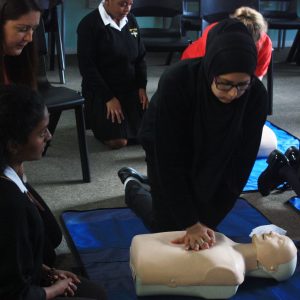 The Resuscitation Council’s main charitable benefit is to increase public training in CPR, as clinical evidence shows that, if a trained bystander is present at a cardiac arrest incident, the survival rate of the person affected increases by as much as 30 per cent.

Research also showed that school children in particular enjoy learning about CPR in class, and that the parent of a CPR-trained child is over 70 per cent more likely to take the training themselves.

With that in mind The Resuscitation Council convened an exploratory committee with a number of other like-mind health organisations, including The British Heart Foundation, St John Ambulance and the British Red Cross, and launched the ‘Restart a Heart’ campaign.

The campaign aimed to train 150,000 young people across the UK in how to perform CPR, on or around the date of the campaign launch, which was on 16 October 2017.

The ‘Restart a Heart’ campaign proved to be a great success, exceeding its training goal by more than 45,000 students. Across the UK over 195,000 young people received CPR training, including some 30,000 students across the West Midlands alone.

A further 19,000 also joined up to play on The Resuscitation Council’s free app: Lifesaver, which teaches the techniques of CPR on smartphones, tablets or online.

This whole programme – which has no doubt already saved lives – was achieved with an outlay of just over £15,000.