One of the world’s poorest countries, Malawi also has huge challenges around sexual health and education. Around a quarter of male primary school teachers have HIV, and only 47% of girls and 56% of boys finish primary school. Nearly a third of girls drop out to get married, and another 20% because they get pregnant. Some 35% of girls in Malawi are pregnant by the age of 18. 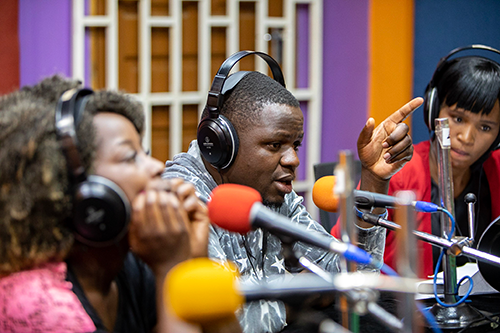 Theatre for a Change (TFAC) had been working in Malawi since 2007, educating and changing attitudes and behaviours around sexual and reproductive health among young teachers and the children they teach. After teachers finished the training, they wanted to stay connected to each other and to the supportive environment of TFAC workshops, and the charity had been pondering how to take its messages and methods to a wider audience. These two drivers led it to the solution of interactive radio drama (IRD).

Stories based on true-life situations are produced as radio dramas and at the end, listeners are invited to call in to play the main character and suggest what they would do differently to change the story for the better. Actors come back on and improvise with the caller.

After a few months, TFAC started broadcasting live on national radio and its reach grew to an estimated 550,000 listeners each week. As well as calling in, listeners were encouraged to post reactions on social media, and these were read out and discussed live.

The project was managed by teachers themselves, who also set up listening clubs in their schools. At the end of the three-year, £450,000 project, 3,124 teachers and 15,792 young people had taken part and surveys suggested that their awareness of their sexual rights and health increased significantly.

The approach has since been replicated in Mozambique by TFAC and VSO to tackle toxic masculinity among teenage boys. And in Malawi during the Covid pandemic, TFAC doubled the number of IRD broadcasts it normally does after the Malawi government asked the charity to lead its Covid-19 behaviour-change messaging on the radio. It also developed and launched a new online IRD training programme for other organisations.

Charity Awards judge Richard Hawkes said the use of theatre to achieve social change was a well-established approach across international development but this adaptation was particularly impressive: “Overall, it was innovative, impactful, and cost-effective.”